The Canon Canonet QL19 is one of my favourite rangefinder cameras. It is very well built and produces sharp contrasty negatives. Confusingly there were several quite different models of the Canonet QL19 produced by Canon. The first was introduced in 1961. It had a large body measuring 140mm wide and a selenium meter photocell which was mounted on the front of the lens.

Another unusual feature of this first Canonet was that the film advance lever and rewind knob were both located on the bottom of the camera leaving the top plate for just the shutter release and flash mount. This arrangement gave this early model a very clean and simple appearance from above. (a) Photographs take with a Canon Canonet QL19 (b) More photographs were taken with Canon Canonet QL19 – Dairy Farm Tractors The next Canon Canonet QL19 produced in 1965 replaced the large selenium photocell with a small CdS light cell above the lens. The film advance lever and film rewind knob were moved to their more typical positions on top of the body.

Then in 1971 Canon released yet another Canon Canonet QL19 model (shown in this article, photographs and video). This camera was much smaller in overall size at 120mm in length and weighing 630g. It has the 45mm f 1.9 lens which has 5 glass elements in 4 groups. According to the manual, the lens is Spectra coated in amber, purple and magenta. I admit I cannot see any of those colours myself. For the sake of avoiding confusion, it is often referred to as the Canon Canonet QL19 “New” or “Latest Model.”

This small QL19 was only in production for less than a year before it was replaced by the later GIII 19 the following year. There were also other Canonet models available with both higher and lower specs. There was the faster QL17 with its 40mm f1.7 lens starting in 1965, together with other Canonets featuring slower 45mm f2.5 and 40mm f2.8 lenses. The top of the line was the 1972 smaller sized QL17 GIII with its 40mm f1.7 lens which had 6 elements in 5 groups.

This is the one which sells for the most money on the online auction websites! However, with all of these Canonets, you would be hard-pressed to see any real noticeable difference in picture quality. As I said at the top of this page the Canon Canonet QL19 “New” reviewed here is one of my favourites. I picked this one up quite cheaply from the New Zealand online auction site TradeMe.co.nz. It is in near mint condition and appears to have hardly been used.

The camera has both shutter priority autoexposure and manual mode. Though strangely the meter only works in auto. This means you need only turn the aperture ring to any position other than the red letter A in order to turn off the light meter. The camera will still operate perfectly in manual mode without a battery. So if the meter doesn’t work you can either meter with a handheld meter or use the meter in another camera to take a reading.

The photographs it takes are always well exposed and contrasty. The meter appears to be very accurate for a 41-year-old camera. I use readily available LR44W 1.55v alkaline button cells. The correct battery recommended in the manual is a 1.3v mercury cell M20. This is the same as a Mallory PX625. These mercury batteries are no longer available. The LR44W alkaline cells I use seem to work fine even though the voltage output is different to mercury cells as they discharge. There is a fair bit of leeway when developing modern negative films so the slight voltage difference doesn’t seem to matter.

Shutter speeds range from ¼ of a second to 1/500 of a second plus B for extended time exposures with a cable release. F stops run from f1.9 to f16. There are also three additional engraved numbers highlighted in blue paint on the aperture ring. These are flash guide numbers. Set the number on this ring to match your electronic automatic flash. When using electronic flash any shutter speed can be used. Canon also produced a dedicated flash for use with the new Canonets. It was called the Canonlite D. This is what the extra contact on the hot shoe is for. When mounted on the hot shoe there is no need to worry about guide numbers. When the aperture ring is set to A the proper f-stop relative to distance is automatically set for you. You sometimes see the Canonlite D come up on online auction sites. Certainly worth getting if you are a fan of this camera.

The viewfinder on the Canon Canonet QL19 “New” is one of the biggest and brightest you will find on any old rangefinder cameras of this size. The earlier and larger Canonets have even bigger and brighter viewfinders simply because these cameras are so much larger. Looking through the viewfinder this camera has large bright yellow lines that frame the shot and move as you adjust the focus so you can keep the subject in the frame. This feature is called parallax compensation. The centre focusing spot is large and very bright which makes accurate focusing quick and easy. I’m sure this is one of the main reasons I find this camera so appealing. Some of these old rangefinders are not so good in this regard. 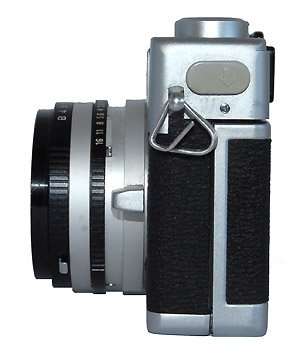 An old trick you can use to increase the contrast of the spot is to place a corresponding mark with a black felt pen on the outside of the rangefinder glass. This works surprisingly well, though the felt pen mark may look a little unsightly.

The large bright viewfinder with this camera makes picture taking a very pleasant experience. The aperture scale is shown in yellow with black numbers on the left of the screen. A needle rises and falls to indicate the aperture chosen by the camera. There is a red zone at the top and bottom of the scale. Should the needle fall into this zone the shutter locks, indicating that you must adjust the shutter speed so the needle returns to within an acceptable range for correct film exposure. A fail-safe system the works perfectly.

To take a manual shot first set the camera to “A” for automatic on the aperture ring and take note of the reading. From there you can calculate an aperture and shutter setting combinations to suit your subject.

These Canonets feature a rather complex mechanical quick loading system for inserting your 35mm film. The system uses a lot of parts which must have added to the cost of manufacture. To use it you need only insert the film in the back and draw the film’s tag end out and across the light box to the orange mark. Then half close the door to lock the film in place. There is no need to insert the tag end into any slots. The QL system works flawlessly. Though it does appear to use a lot of metal parts and be quite complicated for such a simple task, it is nonetheless beautifully made and works very well. This sort of mechanical workmanship and function is something you just don’t see in modern cameras. I just love it!

There is a self-timer which is also located on the lens barrel. Handy if you want to be included in the shot, or if you want to take a slow speed photograph in low light without bumping the camera as you press the shutter release. I timed mine and it runs for 9 seconds.

The Canonet QL19 “New” also came with a light-weight ever-ready case. This is black and made from leather and plastic. I like it because it is not so large and bulky. Overall this camera is finely made and relatively rare having been produced by Canon for less than 12 months. There are many more of the desirable Canonet QL17 GIII models available on Ebay than there are of this model. The QL17 has a battery tester button and light on the back, together with a slightly faster 6 element lens. Otherwise, they are the same camera. I doubt you would be able to tell the difference between the photographs taken with these two models.

I have run quite a few films with this camera. It always delivers sharp well-exposed photographs.

Photographs were taken with a Canon Canonet QL19 New

It is always fun taking along an old film camera to events such as these. I don’t always shoot a whole roll of film at once as I used to back when 35mm film was still king. In those days, if photographing an event, or travelling and fishing, I would shoot as many as six rolls in a day through my Nikon 801. Nowadays I usually have several old film cameras with film in them on the go at once. It may be days, weeks, or in some cases even months before I have the film developed. Getting the film back from the shop is always exciting as you look back over a series of shots taken some time ago. Often I can forget what was on a particular roll of film which adds to the anticipation when it is developed. Sadly that feeling has been lost in the digital age now that we get to see the picture on the back of our camera almost the instant it is taken.

A good tip is to stick a short length of masking tape to the back of your camera on which you have written the details of the type of film including how many frames 24 or 36, ASA speed, and the date you loaded it. Then when you remove the film from the camera at the end of the roll you can tear the tape off the camera. I have lost count of how many times I have picked up an old film camera and started winding on and firing the shutter only to be struck with that sinking feeling you get when the film rewind crank starts to turn as you wind on. Worse still is picking up a camera to put a new film in it only to discover there is already one in it halfway through the roll.

With the film being more expensive to use than digital I am more inclined to take my time and think about each shot before pressing the shutter release. I’m also more inclined to use a tripod to minimise camera shake. All in all, it is a more leisurely way of taking photographs which I find very enjoyable. The Canon Canonet QL19 used here is one of my favourite old 35mm film rangefinder cameras.

There is some very interesting information here at the Canon Camera Museum on the Canon Canonet range of film cameras.